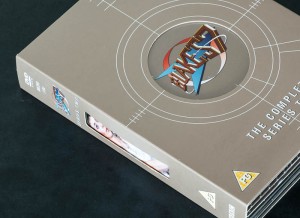 Happy New Year everyone. I think this is my 7th Blipday (7 years of using the daily photo web site Blipfoto).

This is the best I could come up with which has a ‘7’ theme. I chose series 2 as Jacqueline Pearce is on the cover (the chief villain, Supreme Commander Servalan), and she died in September 2018. Not really a great TV series, but perhaps unusual as none of the characters in it were very likeable. The last series ended with a major shootout in which apparently all the characters were killed – except Servalan, she strangely didn’t appear either to supervise the executions, or to be killed as well.

Mentioning the end of a series, now that I find it difficult to get out at all, let alone visit anywhere interesting, I’ve very reluctantly decided I cannot continue to post daily photos on B Blipfoto there any longer, though I hope I may occasionally post a photo there.  However, I hope to continue to post daily here on my own blog site, for which I can allow myself to use some old photos which I will be re-processing.

I'm a BOF (Boring Old Fellow) and MOS (Miserable Old Soul) whose main interests are photography, cycling, walking and computers. Regrettably recent problems with my legs, back and heart have reduced the cycling and walking.
View all posts by Mike Hessey →
This entry was posted in Uncategorized. Bookmark the permalink.